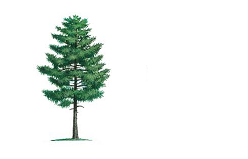 All the 50 states of the U.S. and some U.S. territories have a ‘State Tree’. Maine’s state tree is the white pine, Strobus pinus.  All of the trees, except in Hawaii, are native to the state in which they are designated. The majestic white pine typically grows tall and straight. It does not have the conical form of a Christmas tree, which are spruce or fir trees. The largest white pine in Maine was recorded in 2007 at 132 feet tall with a girth of 229 inches. Because of the growth habit of the white pine, it played an important part in U.S. and world history. Valued as an exceptional tree for the use as ship masts, the trees became the dominant export of the new world for the British Royal Navy as early as the 1640s. Thus began the desire to grow the new colonies to support this enormous industry. Today the white pine is often overwhelming in the residential house lot, but in the large forest tracts of Maine, it defines the northern woods earning it’s designation as the state tree.

Check out all the state trees: